Our Hood River to Mosier route takes the Old Highway — but you can’t go all the way by car. A large section is biking and hiking only. It’s a great bike route though. Park your car by the entrance to the wide, paved trail east of town.


On this section we’ll travel on both I-84 and the Historic Highway Trail and see the Hood River Marine Park, Panorama Park (just south of Hood River), Hood River County Museum, the Mark O. Hatfield Trail, Koberg Beach, the Mosier Twin Tunnels (on the historic trail), Eighteen Mile Island and the town of Mosier.


If you’re still on I-84, take Exit 64 to Hood River and head south to the State Trailhead to head east of town. Only hikers and bikers can travel on much of the Hood River to Mosier section, but near Mosier, the historic highway is once again open for motorized vehicles.

East of Hood River to the Historic Trail 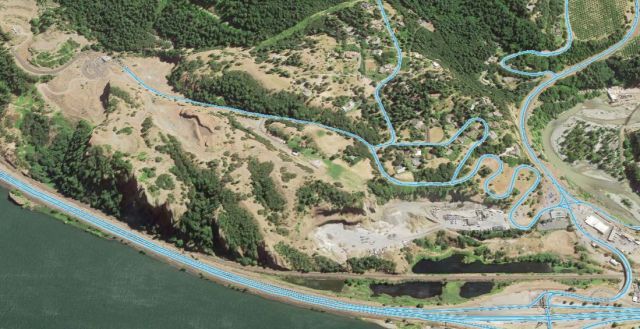 From Hood River, head east and cross Hwy 35 and drive up the old Columbia River Hwy to the parking area. This restored portion of the Historic Trail is worth the effort, especially if you like tunnels and great vistas.

A wagon road was finally built through the gorge in the 1870s, with The Dalles and Sandy Wagon Road. However, this road had steep (20%) grades and a crooked and narrow alignment, and it was not until 1882 that the Oregon Railway and Navigation Company finally opened a water-level route.


Between Hood River and The Dalles, construction of the historic highway was delayed by rugged terrain.

Inspiration Point, near the S-Curves and Bingen Overlook were part of the dozens of restoration projects recreating the Historic Highway, documented by A.F. Litt

The Mosier Twin Tunnels, completed in 1920, carried the road through a portion of the hill and featured two windows, similar to the five at Mitchell Point. The road rises to the covered Twin Tunnels Catchment Structure at the west end of the tunnels to protect against falling rocks.

The Historic Columbia River Highway State Trail, which passes through the Mosier Twin Tunnels, is one of the more interesting sections and was one of 15 hikes along the Gorge photographed by Google’s mobile StreetView camera.

In 1954, with the construction of I-84, the unique Mosier tunnels were abandoned. In 1995, work was begun to reopen the tunnels for tourist use. This involved the removal of the rubble, and rebuilding and resurfacing the road. Today, the section has been completely restored. The 4 1/4 mile trail was opened to tourist use in 2000. You’ll find milepost 72 inside the tunnel as well as carved graffiti from 1921, detailing the names of people that were trapped in the tunnel during a snowstorm.


To find the east entrance near Mosier, take I-84 exit 69 to Highway 30. Go north on Rock Creek Road about a half-mile to the Mark O. Hatfield Trailhead East. Access to the trails is free but a $3 Oregon State Parks day-use permit is required to park at either trailhead.

The 60-mile Mark O. Hatfield Trail begins at the Multnomah Falls Lodge and traverses through the rugged high country of the Hatfield Wilderness.

Eighteenmile Island is about a half mile downstream of Mosier and four miles upstream of Hood River. It can be seen from Interstate 84 and is only accessable by boat. The island’s only structure is a private residence, a three-story wood-frame house built in 1969. It is one of very few remaining privately owned islands.

NEXT: Mosier to The Dalles